The Slice: Set aside some time to plan your meals and you’ll save time later in the week when you need it most.

The Challenge: Instead of eating whatever I had lying around or going out to eat, I challenged myself to plan out my meals for the week and stick to the plan. Turns out it cost more than I thought (in more ways than you might guess).

In honor of one of our country’s more gluttonous holidays, Thanksgiving, I decided to do something nice for my body before filling it with mashed potatoes and pumpkin pie. I planned out all of my meals for the week leading up to the holiday. That way, I knew exactly what was going into my body, how much I was paying for it, and what healthy successes could be gained.

I have a tendency to buy my meals out. But when I do, I know there are consequences. I generally overpay for something I could have made at home. I also never know how the food I’m purchasing is prepared, so I could be eating foods that are more processed, salted, and caloric than if I’d cooked at home. All this is to say, I wanted to make a change. I wanted to stock my fridge with healthy groceries for the whole week.

We’ve all been through this before: starving, you check your fridge to find a can of whipped cream, olives, a loaf of bread, and butter. You find yourself making toast with butter and honey and taking shots of whipped cream while you wait. What went wrong? You forgot to make a plan….

If I was going to plan all of my meals, the plan was the first thing I needed.

I found some interesting recipes and meal plan tips, made a list of ingredients, and went shopping. Because I was trying to make healthy meals, I ended up purchasing several ingredients I didn’t previously own. After the new spices, coconut oil, and protein powder, I ended up spending more than expected: $168.91. Ouch…

I’m not much of a Susie homemaker – I don’t hate cooking, but it’s not my happy place either. I commend people who love to get in the kitchen, but cooking can be a bit overwhelming for me. I always want to get things perfect, and I’m disappointed when I undercook or over-spice something (and wait ’til you hear how much I over-spiced this week!). 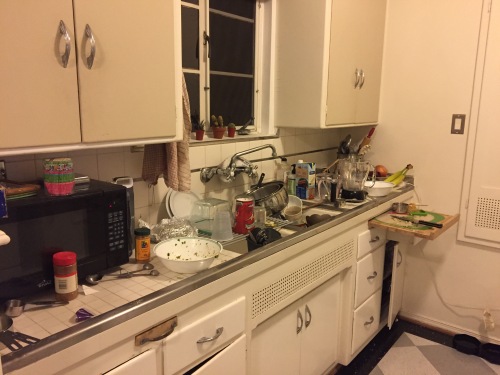 My kitchen after prep night.

So the 5 hours I spent cooking and prepping the Sunday before my week of meals was pretty overwhelming. I bit off more than I could chew (literally) and made healthy blueberry muffins, chia pudding, hard-boiled eggs quinoa, chili, and cut up veggies for the week. Then I had to wash all the dishes. By 1 AM I was exhausted, covered in mashed banana goop and almond flour, and wondering if this would be worth it.

It was worth it

Turns out, after the prep day there wasn’t much I needed to do. I’d wake up in the morning with a chia pudding or muffin waiting for me. Snacks included piece of fruit and some nuts in the morning and veggies with hummus in the afternoon. Lunches meant a salad with chicken or an egg for protein (or some pretty delicious latke-like quinoa cakes), turkey burgers, or chili with veggies and quinoa.

Chia pudding is great for a snack, and tastes better than it looks!

I only faced two issues over the course of the week

The first was my homemade chili. The recipe called for an ungodly amount of cayenne and chili pepper, but as an amateur, I followed the recipe blindly. I ended up with the hottest chili I’ve ever tasted. Now the conundrum – eat the chili and cry the whole time or break with my plan and go buy something else? Let’s just say there were several soaked tissues by the time I finished dinner that night.

The other issue was figuring in meals that I hadn’t planned for. When my supervisor took me with her to a business lunch, I had to ditch my pre-made meal. I ate it later in the week, but that meant something else went uneaten. When I finished my week, I parted ways with some sad grapes and soggy spinach left over in my fridge. It may be smarter to plan a little less than needed when I schedule out my weeks in the future.

All in all, this was a great week filled with (some) yummy meals! I really loved having everything planned out ahead of time and I even dropped a few lbs (which I promptly gained back over Turkey Day weekend). This is a challenge I plan on continuing!

Julia Hubner is YDA’s body contributor. When she’s not preparing her own meals, she loves Homestate, the breakfast taco place near her apartment.

2 thoughts on “Every girl’s new best friend for getting in shape: Meal planning”

This area of your home page is configured by going to the Customizer and adding widgets in the Front Page widget areas.