The Slice: When your landlord won’t allow a communal compost bin, take matters into your own hands!  I grabbed a bin, some worms, and started a personal red worm composting bin in my backyard.  Here are all the dirty details of my experience…

The Challenge: Build and maintain a red worm compost bin

On a recent trip to visit my sister in Menlo Park, I went to throw my banana peel in the trash and was stopped dead in my tracks. 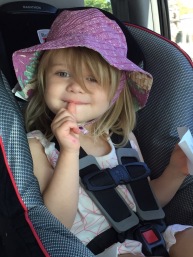 I’m pretty sure when I was 3, I didn’t know the difference between the trash can and the floor.  Yet, naturally, my Northern California-born-and-bred niece knows the rules of composting better than I do.

Now, I think I do a pretty good job with my recycling (at home at least).  However, I will admit, the thought of composting had never really crossed my mind.  Until now. If Emma can compost, I’d like to think I can too.

Start by doing your research.  Depending on where you live, and if you are a homeowner, the easiest way to compost is to secure a green bin like this one from your local city conservation center.  Easiest way to find out if your city promotes green bin pick up is a quick Google search for “your city (i.e Santa Monica) + compost.” Sadly, while Santa Monica Public Works is all about green bins, my landlord is not.

After ruling out green bin composting, I noticed that the Santa Monica Public Works also sells smaller compost bins for personal use.  Inspired, I took my first visit to the Santa Monica Conservation Center to find out more.

Upon arrival, with admittedly far too much pride in my gallant “community-oriented” choice to compost, I smiled as I greeted the receptionist “Hi! I’m a Santa Monica resident, and I like to buy a bin for a personal compost garden.”

Unimpressed, she asked me, “worm,” or “regular.”

To Worm, or Not to Worm… 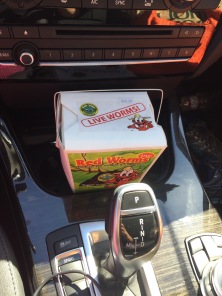 This was a first

Oops…Didn’t see that option on the website. Clearly I had not done enough research here.

Hiding my surprise, I politely asked the woman “to remind” me of the difference.  She explained in the worm bins, worms turn waste into compost by consuming it, while the alternate method requires matter to decompose naturally.  Here’s a more thorough explanation if you’re curious.

I’ll be honest, I immediately thought the worm option would be less smelly (correct!), and that was the basis of my decision. (Don’t judge me.  At least I’m trying!) 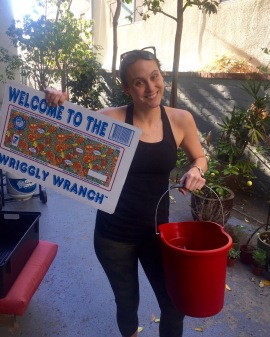 settin’ up that Wriggly Wranch

After a financial investment of nearly $70 on my $50 “Wriggly Wranch” and $20 pound of red composting worms, I was more even more committed to my decision to build and maintain this thing.  Note to self and others: going green is not always cheap.  Driving home I was beginning to feel quite proud of myself.

Additional note: From my research, the Wriggly Ranch is only available for sale at individual city waste centers rather than online.  Here’s a guide to picking the bin that works best for you  However, if you do get your bin from the city, they usually give a discount. 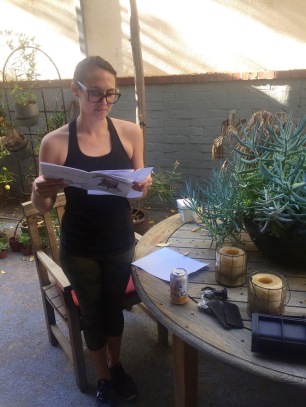 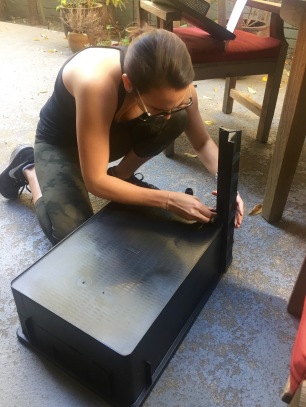 Well, again, I should have done more research.  I’m always guilty of never reading directions and it inevitably comes back bite me in the tusch.

To put it kindly, the “guide” provided in the Wriggly Ranch leaves much to the imagination.  If you plan on starting your own compost garden, in retrospect, I would suggest using this guide or this one instead.

My Wriggly Ranch is set up.  The worms are in.  I’ve been careful to not to overwhelm them with too much food.  I also given them a cup of water daily to keep their environment moist per the not-so-helpful instructions from the Wriggly Ranch guide (can you tell I’m bitter?).

Just my luck.  After all my efforts, my little worms are not eating! My dreams of compost heroism have been dashed.  Ironically, while I once found these little critters disgusting, I’m now comically distraught over their well-being.

It’s now Day 5, and after doing more research that I should have done before starting this endeavor, I realized that the food I gave my worms initially was too fresh.  Going forward, I need to let my food sit a bit longer before giving it to the worms so it’s easier for them to digest (talk about a high maintenance pet).

So, after all this, I’m now in a waiting game until my worms’ metabolisms speed up so they can consume more and multiply (oh goodie).

I’m glad I learned more about composting through this challenge. 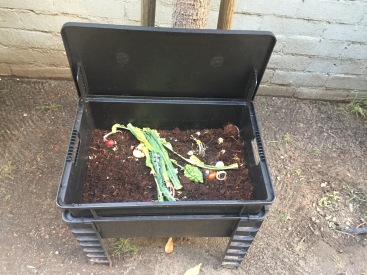 Hope that kale tides them over for a while…

As far as my advice to others, unless you really know what you’re doing, I think it would likely be cheaper and a better use of your time to locate a green bin, or to lobby for compost pick up in your county or at your apartment complex if you do not currently have the option.

As for me, I guess I’ll keep taking care of these little guys and hope for at least a minimal reduction in my food waste as a result.

Kathleen Bryson is YDA’s community contributor.  She wanted a dog for christmas, but this year she’ll have to settle for some red composting worms.

This area of your home page is configured by going to the Customizer and adding widgets in the Front Page widget areas.